After Dinner Murder Mystery provided me with a free copy of Foul Play to review. My opinions are my own.

Murder is on the cards!

It’s up to you to unearth the evidence, seek out the suspects and catch the culprit in order to scupper the other sleuths and win this game of murder.

There’s more than one way to catch a killer though. So what’s it going to be? Good Cop or Bad Cop? These two game versions come with their own set of rules and tactics to crack the case and finger your suspect but will you use fair play or…

FIRST IMPRESSIONS were good: nice artwork, good flavour text, easy rules to pick up. Very portable. The rules were clear and intuitive. I was intrigued by the good cop/bad cop variations.

We quickly got the hang of the mechanics and the game atmosphere soon settled into a search for the evidence. Things quickly turned secretive, with the tactics of the game starting to emerge as we played. Speed of play increases as the game progresses, and as we raced to hold the suspect in our hands and declare a win, the play became increasingly sabotaging. Card replacement each turn and frequent swaps/steals mean that people’s hands are constantly changing, so you are guessing where the suspect is likely to be and then targeting that player – assuming you have a card that allows you to take it.

Even though it feels secretive, the cards can force you to share your evidence by making everyone reveal their hands. The tactic of hiding cards in the “crime scene” became more obvious towards the end, and we’ll definitely be using it more in future games. Foul Play reminded me a little of Cluedo, crossed with Exploding Kittens (there’s an image…) – partly luck, partly tactical, with a little tactics psychology.

Two players:  Much faster game, better idea of where cards are hiding. Less chance of being blocked.

Much shorter games than with Good Cop. The 4-player game was very quick, because the evidence is so ubiquitous. Play was more tactical with 2 players, but in different ways to the Good Cop variation: there is less interaction between hands because you aren’t fighting over the same cards. Stealing/swapping seems to be less important, and sometimes it is better to discard action cards rather than play them. We didn’t use the crime scene as much.

Verdict: Good filler for a meetup. Also good for drinks at the pub. 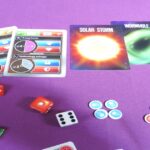 Harriet Cooper
SAVANIA GAMES Disclosure: Savania Games provided me with a free copy of Cosmic Voyage to review. My opinions are my own. Your ship is stranded ... 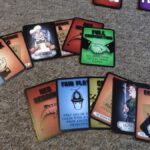